Industry representatives from across Europe spoke with a united voice highlighting the important role played by all fleets, both small and large, in providing healthy food to the consumers and creating employment and wealth in fishing dependent areas. Europêche members recalled the major change over the past 20 years of the fishermen’s behaviour, who are now closely collaborating with scientists and civil society organisations to sustainably yield our fish resources, and highlighted the need for proportionate and workable legislation.

There was general consensus on the enormous achievements realised in the North East Atlantic with many thriving fish stocks. However, all parties agreed on the need to put more efforts in the Mediterranean Sea whose situation is expected to improve thanks to the recently adopted policy and legislative tools.

Both Europêche and the chair of the PECH Committee shared the objective to continue reducing discards as much as possible in Europe. For that purpose fishermen are doing their best to be more selective and to comply with the new rules. However they agree that the EU landing obligation as established in the Common Fisheries Policy (CFP) is not working as intended. In this respect, industry representatives expressed concern over the administrative difficulties encountered to develop selectivity pilot projects which require special authorisations, the patchwork of rules contained in the many discard plans which render control difficult, the increase in working time and safety risks, the clash with national rules and the complexity of mixed fisheries management. Europêche called for the revision of Article 15 of the CFP as a matter of priority for the legislators.

Concerning the enforcement of the landing obligation, while there was disagreement between Europêche and EU representatives over the mandatory introduction of cameras on board fishing vessels, there was consensus on the need to guarantee business confidentiality and workers’ rights and to create incentives for its (voluntary) use. Europêche members argued that cameras will not be the panacea to solve the landing obligation challenges and pointed to the fact that countries with a longer history of a discard ban - such as Norway and New Zealand – do not work with cameras on board.

All parties agreed on the need to achieve a political agreement on the European Maritime and Fisheries Regulation in the shortest timeframe possible to avoid delays. There were unanimous views on the need to improve safety, working and living conditions and better energy efficiency, while respecting national ceilings for fishing capacity. Europêche stressed that these investments are key to make the industry more attractive to young professionals, introduce new technologies, combat shortage of crews and allow the generational change. In addition, recent social legislation lays down the obligation to provide more space for housing crew members on board new fishing vessels. The sector recalled that in many parts of Europe, the average-age of artisanal fishing vessels is 40 years[1] and therefore operate under unsafe and precarious conditions. Attention and support from the EU to these fleets is urgently needed. 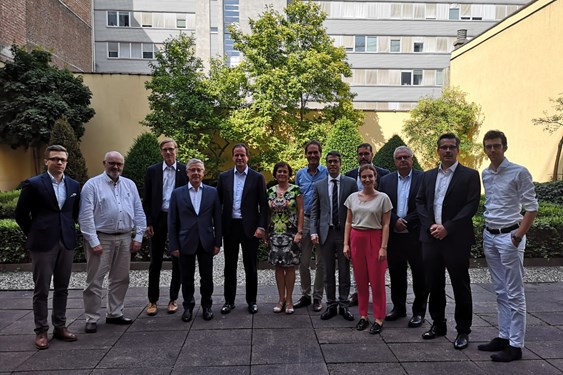 Europêche members also referred to the importance of the external dimension of the CFP, particularly the mutually beneficial fisheries agreements signed with 3rd countries and the key role played by the Regional Fisheries Management Organisations in sustainable ocean governance. The industry welcomed the EU tough stance against illegal (IUU) fishing and called for a level playing field regarding the treatment of EU and non-EU fish products within the common market organisation. Furthermore, the sector emphasised the need for coherence between the different European policies on fisheries, trade, social, and health. In this regard, it is fundamental for the fleet to eliminate trade preferences for seafood coming from countries connected with IUU fishing and serious labour abuses like Vietnam.

Europêche encouraged DG MARE, as the competent body for maritime spatial planning, to prioritise the fishing sector as a key user of the marine space in view of being first and foremost a low impact food producer and prevent the paradigm shift of the use of the sea from a source of food to a source of energy, particularly in the North Sea.

The managing director of Europêche, Daniel Voces, welcomed the positive attitude and constructive nature of the meeting: “I am very pleased that Mr Davies is actively engaging with the fishing sector and has shown a great willingness to continue an open door policy in the future. We welcome his goal to secure a profitable and long-term future for our fishing industry. We have come a long way, with booming fish stocks in many parts of Europe and we need to continue this positive momentum."

Europêche representatives used the occasion to unanimously appreciate Mr Aguiar Machado’s efforts, openness and commitment to sustainable fishing and a viable sector during his 4 years at the helm of DG MARE and wished him every success in his future endeavours as head of the EU Mission to the World Trade Organization where important discussions on fish subsidies are taking place.